Bangladesh thrashed Zimbabwe by 143 runs on Monday to level the two-match Test series by 1-1 in the second Test at the Harare Sports Club. Bangladesh thrashed Zimbabwe by 143 runs on Monday to level the two-match Test series by 1-1 in the second Test at the Harare Sports Club.

Zimbabwe were bowled out for 257 in chase of 401 for win in the second essay, as the Asian side produced an inspired all-round show after being mauled in the first Test by 335 runs.

Earlier in day, Hamilton Masakadza continued his stubborn resistance for Zimbabwe on Monday but two wickets in the first session of day five kept Bangladesh on course for a series-levelling victory.

Masakadza extended his vigil at the crease to 182 deliveries on the way to 73 not out but the dismissal of his brother, Shingirai, brought a double breakthrough for Bangladesh and left Zimbabwe on 194 for six at lunch — still 207 runs short of an unlikely victory.

The Masakadza brothers had thwarted Bangladesh’s bowlers for 119 minutes, seeing the home side through the first hour of the final day unscathed before Shingirai was trapped lbw by Mohammad Ashraful.

Elton Chigumbura‘s stay at the crease was brief, as he chipped his ninth delivery tamely to short midwicket as Zimbabwe threatened to collapse.

However Richmond Mutumbami joined the older Masakadza and saw Zimbabwe through to the lunch break.

Bangladesh will have at least 59 more overs in their bid to claim the last four wickets, while the second new ball is just five overs away. 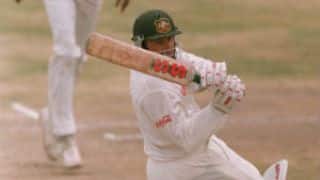