Bangladesh lost openers at Lunch on Day Five of the first Test match against West Indies at Mirpur on Saturday. 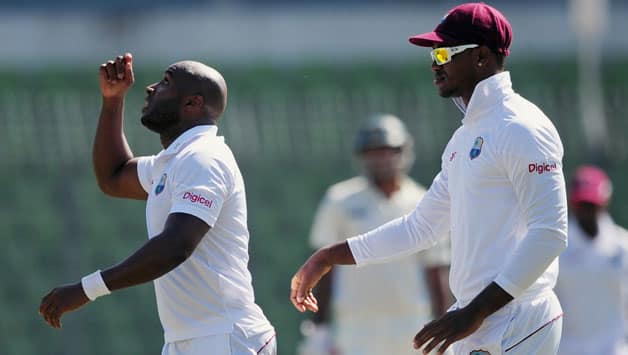 Spinner Sohag Gazi took six wickets on debut but the home team lost both openers in pursuit of a 245-run target that left the result of the first Test against the West Indies wide open on Saturday.

The 21-year-old finished with 6-74 in an impressive bowling display to fold the West Indian second innings on 244, giving Bangladesh a gettable target to win in a possible 78 overs on the fifth and final day.

Bangladesh went to Lunch at 45-2, with Shahriar Nafees unbeaten on 19 and Naeem Islam yet to get off the mark as the Tigers needed another 200 runs in the tension-packed last two sessions at Shere Bangla stadium.

Openers Tamim Iqbal (five) and Junaid Siddique (20) were the men dismissed as Bangladesh seek what would be their second home win — or fourth ever.

The home team were set up by off-spinner Gazi who recorded the best figures by a Bangladeshi bowler on debut.

The West Indies resumed at 244-6 with their main hopes resting on Darren Sammy but Gazi was in superb bowling form as he trapped the tourists’ captain lbw in the second over of the day for 16.

He then took two wickets in one over to record his maiden five wicket haul in his debut Test, cleaning up Ravi Rampaul (five) and Tino Best (nought) off successive deliveries.

Shivnarine Chanderpaul, who hit 203 not out in the West Indian first innings total of 527-4 declared, came out to bat at number eleven because of illness and although he averted hat-trick he was trapped leg-before by Gazi for just one.

Gazi became only the third Bangladeshi bowler behind Naimur Rahman and Elias Sunny to grab five or more wickets in his debut Test, but his 6-74 is the best among the trio.

Umar Akmal in trouble over comments on coach Basit Ali