Fifties from skipper Mushfiqur Rahim, Shakib Al Hasan took Bangladesh to a healthy total of 272 for nine against India in the first One-Day International (ODI) at Mirpur on Sunday. It was a stuttering performance from the batsmen losing wickets at regular intervals. However it was the partnerships in the middle order which helped them build towards a competitive total on a slowish wicket and humid conditions. It was a disciplined performance from the Indian bowlers with debutant Parvez Rasool picking two wickets and Umesh Yadav bagging two. Bangladesh could have posted a bigger score if their batsmen had not squandered the starts with rash shots. The third, fourth and fifth wicket for Bangladesh shared partnerships worth 52, 47 and 65 runs respectively which laid the foundation for the eventual total.

India opted to go with five specialist bowlers which included three spinners. This meant that left-arm spinner Akshar Patel and off-spinner Parvez Rasool got their maiden ODI cap. Robin Uthappa to made an expected comeback in the playing XI, featuring in the team for the first time since 2008.  On a flat track, Bangladesh opted to bat looking at the forecast of rain later in the day. Mahmudullah was felicitated before the start for his 100th ODI.

It was a two paced wicket in the beginning and the Indian pacers started off well not allowing the free-flowing Tamim Iqbal and Anamul Haque to play their shots. Umesh Yadav struck first removing a nervy Tamim for a 11-ball duck. The replays though showed that Kumar Dharmasena might have erred with that decision. Looking at the pace of scoring, skipper Suresh Raina persisted with Yadav and the pacer struck again removing Mominuq Haque (6).  Bangladesh played as many as 34 dot balls in the first seven overs.

It was once again left to the skipper Mushfiqur  to break the shackles against a disciplined bowling performance and he succeeded. With Yadav off the attack, Rahim mostly faced the spinners and like a typical subcontinent batsman, used his feet and played the ball in the gaps picking the crucial singles and twos apart from the boundaries. Meanwhile, Anamul had got his eye in and started to score freely. Mushfiqur’s fluent touch egged Anamul to keep the score moving. He made most of the dropped catch from Raina in the ninth over when the Indian skipper floored an relatively easy catch in the slips.

India’s 202nd ODI debutant Rasool was brought on post the drinks break in the 19th over. Overall, there was not much turn on offer for the spinners and they opted for variation in pace and length to keep the batsmen in check. The shot of the day so far came from Anamul who reverse swept Rasool over covers for a boundary. As the pitch started slowing down and the temperatures soaring, the batsmen were content in playing in the gaps and picking singles.

Just after the duo brought up a 50-run stand, Anamul threw his wicket away mistiming a slog straight towards midwicket giving Rasool his maiden ODI wicket. But there was no stopping Mushfiqur at the other end as he followed up with a six off Mishra and a boundary in Rasool’s next over. He completed his 15th ODI fifty in the 27th over. The specialty of Rahim’s innings was that he never looked to be under pressure against any of the bowlers and used the slog sweeps to great effect. Just like Anamul, Rahim too squandered the start going for a big shot against Rasool and the thick edge saw him caught by Ajinkya Rahane for 59.

After Rahim, Shakib took on the responsibility and along with Mahmudullah upped the ante during the batting powerplay. Shakib targeted Rasool in particular and reached his 26th ODI fifty. Even Shakib lost his way after the half-century being dismissed for fifty by Raina. 24 of those 52 came against Rasool in 25 balls.

Mahmudullah, playing in his 100th ODI scored briskly with able support from Nasir Hossain. He was bowled by Mishra for a 44-ball 41. The ninth wicket pair of Mashrafe Mortaza and Abdur Razzak hammered a few boundaries before Patel bagged his maiden wicket dismissing Mortaza for 18.

Under extremely hot and humid conditions, Indian bowlers showed great fitness and focus. Barring Mohit who struggled with a niggle in the toe, Indians showed no discomfort. 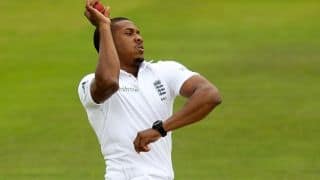