Bangladesh outclassed India in every department of the game and justified all the hypes which were created around this rejuvenated team.

Before the start of this three-match One-Day International (ODI) series, it was expected this new looked ‘Team Bangladesh’ will be a tough nut to crack, especially in limited overs format and the ‘Bangla-Tigers’ proved it right by beating India by a record margin of 79 runs in the first ODI at Dhaka. A five wicket haul on debut by 19 year old left-arm seamer Mustafizur Rahman helped the hosts to take a sweet revenge of the World Cup quarterfinal defeat. Scorecard: India vs Bangladesh 2015, 1st ODI at Dhaka

Exactly 10 overs back, on June 18, Bangladesh beat Australia at Cardiff. After a decade, they have outclassed India in every department of the game and justified all the hypes which were created around this exciting emerging team. Also with this victory Bangladesh increased their chances of qualifying of the ICC Champions Trophy 2017. They need just one more win in their upcoming five ODIs to qualify. Blog: India vs Bangladesh 2015, 1st ODI at Dhaka

ODI cricket has seen some drastic chances in recent times. These days scores of 350 are not safe anymore, as we have seen in the ongoing England-New Zealand series. So a target of 308 was challenging but not very difficult for this power-packed Indian batting line-up and Indian openers, Rohit Sharma and Shikhar Dhawan gave them an excellent start of the chase. At the end of 15 overs, India were well on course, with 90 for no loss.

But within the next 30 minutes, the match took an u-turn.

India lost their first wicket in last ball of the 16th over and withing the next 57 balls, the men in blue were five down for 128. Bangladesh pocketed the game within that period. Taskin Ahmed started the slide with the wickets of Dhawan and Virat Kohli. Soon Mustafizur grabbed the limelight. He first dismissed a well set Rohit, who had just scored his 24th ODI fifty. A well disguised slow ball did the trick. Ajinkya Rahane was his next victim. Another slower delivery fetched him the wicket. Finally when Shakib Al Hasan got rid of MS Dhoni, India were almost out of the game.

Suresh Raina and Ravindra Jadeja tried a bit with a 60-run partnership for the sixth wicket but that was not enough, thanks to the dream debut of Mustafizur, whose off cutters earned him crucial breakthroughs in the crucial periods of the game. Apart from him Taskin and Shakib took two wickets each. India failed to bat out their 50 overs and history was created at Sher e Bangla national stadium.

Earlier on a hot and humid day at Dhaka, Bangladesh skipper Mashrafe Mortaza won the toss and decided to bat first. Some inspired knocks by Soumya Sarkar, Tamim Iqbal, Shakib Al Hasan and Sabbir Rahman proved the decision right, and gave India a challenging total of 308 to chase. At one point of time it looked Bangladesh would score much more, but Indian bowlers made a late comeback and restricted the hosts to a manageable total.

Bangladesh had a flying start of the innings as both openers Sarkar and Iqbal came out all guns blazing. Indian pacers bowled bit short initially and gave the Bangla openers enough opportunities to play cut and pull shots. The slowness of the wicket also went in their favour as Indian pacers failed to get anything out of the deck.

Both Sarkar and Iqbal put up the highest opening partnership (102) for Bangladesh against India. The previous best was 80, when Iqbal was involved with Imrul Kayes in 2010. Meanwhile today, Indian bowlers didn’t have any clue against the Bangladesh openers. Both Sarkar and Iqbal reached their half-centuries. Finally the partnership was broken following an unfortunate run out of Sarkar. Just after that, as predicted, the rain gods arrived at Dhaka and the game had to stop. At that point of time Bangladesh were 119 for one in 15.4 overs.

The match resumed after a break of 63 minutes, though no over was deducted. But the rain break had a clear effect on the momentum of the Bangladesh batters. Ravichandran Ashwin struck thrice and brought India back in the game. He removed Iqbal, Litton Das and Mushfiqur Rahim. Amongst those three, Iqbal and Rahim played very poor shots and threw their wickets away. Withing a gap of few overs, Bangladesh  were restricted from 123 for one to 146 for four.

From there Shakib Al Hasan and Sabbir Rahman steadied the hosts with a 83-run partnership. Both batted quite aggressively and kept the run ran flow going. Later in the innings Nasir Hossain and Morataza scored some handy runs to help Bangladesh cross the 300-run mark, their best ever score against India.

Amongst Indian bowlers Ashwin was undoubtedly the best bowlers on show. He finished with a figure of three for 51 in his 10 overs. Dhoni also used  Raina’s dibbly dobbly off-spin and Kohli’s medium pace, which cost only 52 runs in 12 overs. Kohli also did the wicket-keeping job from brief period of time during the course of this innings.

Both teams will again lock horn on June 21 in the second ODI of this series.

Man of the match: Mustafizur Rahman 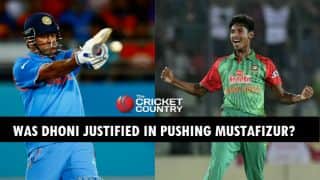