There is expected to be no opposition from the Bangladesh Cricket Board, according to AFP.

Mashrafe Mortaza, the most-capped Bangladesh cricketer in ODIs, will stand in next month’s election, an Awami League spokesperson announced Monday.

The current ODI captain and country’s leading wicket-taker in the format has been endorsed by the ruling party’s leader and Bangladesh’s Prime Minister Sheikh Hasina. Mortaza and Hasina – seeking a third consecutive term in office on December 30 – were photographed together recently and the image was front-page headlines on many Bangladesh newspapers today.

“He plans to contest from Narail,” said spokesman Mahbubul Alam Hanif, referring to Mashrafe’s hometown district in western Bangladesh, though the hugely popular allrounder, 35, has said nothing publicly.

There is expected to be no opposition from the Bangladesh Cricket Board, with spokesman Jalal Yunus telling AFP: “To run in an election is his constitutional right. If he wants to exercise these rights, we have no issue. We expect him to keep the balance between his playing career and politics.”

“I may be wrong, but this is the worst decision of his life,” one fan, Omar Faruq, wrote on Mortaza’s fan page on Facebook.

In 197 ODIs dating back to his debut in 2001, Mortaza has claimed 252 wickets to occupy top spot in Bangladesh’s all-time bowling table. The 2019 ICC Cricket World Cup in England looms as his last assignment for Bangladesh. 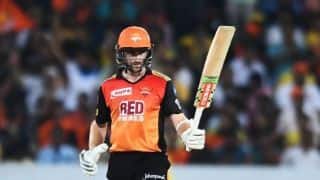