The Sixers have won their second match on the trot and are still alive in the tournament.

Chasing 196, Khulna made a decent start with Brendon Taylor and Junaid Siddique smashing a flurry of boundaries. However, after the two were dismissed by Taskin and Samad respectively, the Khulna cookie began to crumble, and it never revived from thereafter.

Taylor top scored with 34, while for the Sixers, Samad returned with figures of 3/20 in his allotted four overs, while Taskin went for six runs in 1.1 over. (ALSO READ: Sohail Tanvir stars as Sylhet Sixers beat Rajshahi Kings)

Earlier, after opting to bat, Liton Das and Afif Hossain put together 71 runs for the opening wicket in under eight overs. Jason Roy and Nicholas Pooran were then dismissed cheaply, but Sabbir Rahman ensured the run-rate did not dive, and tonked four boundaries and two sixes for his unbeaten 29-ball 44. Rahman had Mohammad Nawaz (39 off 21) for company as the duo applied the finishing touches to the innings with an unbeaten 89-run partnership which included 11 boundaries.

Taijul Islam was the only bowler who could pose some threat to the Sixers batsmen. He picked up 3/30 in his four overs. (ALSO READ: David Wiese stars as Khulna Titans beat Sylhet Sixers)

The Sixers have won their second match on the trot and are still alive in the tournament, while Khulna Titans are firmly occupying the bottom position after 10 games. 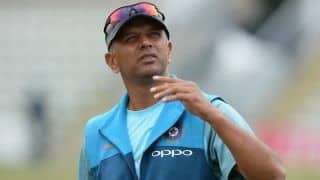 If people have been told they can fudge their age, that is the start of a problem: Rahul Dravid chalks the way forward for Indian cricket