Visitors Bangladesh registered their first ever victory against Sri Lanka when they beat them by 4 wickets on Day Five of the second and final Test of the ongoing series at the P Sara Oval, Colombo.

Visitors Bangladesh registered their first ever victory against Sri Lanka when they beat them by 4 wickets on Day Five of the second and final Test of the ongoing series at the P Sara Oval, Colombo. The two teams had earlier played 16 Tests of which Sri Lanka won 14 and the rest were drawn. Bangladesh made a comeback on the tour with the second Test after losing the first, and made a strong statement ahead of the One-Day Internationals (ODIs) and the Twenty20 Internationals (T20Is). Bangladesh chased down 191 runs in the final session and won by 4 wickets, with ample help from Tamim Iqbal and Sabbir Rahman. Full Cricket Scorecard: Bangladesh vs Sri Lanka, 2nd Test at Colombo

Bangladesh did a decent job to restrict the hosts at 338 in the first innings. Sri Lanka, who won the toss and elected to bat, lost 3 early wickets and were left struggling at 35 for 3 till Dinesh Chandimal took the charge. Though he did not find much support from the other end, Chandimal himself pulled his team s score beyond 300 scoring 138 runs. Suranga Lakmal (35) played a handy knock down the order and helped further while Dhananjaya de Silva (34) and Niroshan Dickwella (34) also made some crucial contribution. Mehedi Hasan was the pick of the bowlers with 3 wickets while Mustafizur Rahman, Subhashish Roy and Shakib Al Hasan picked up a couple each.

Bangladesh displayed brilliance with the bat. It was a balanced performance with the entire batting order contributing but Shakib Al Hasan s 116 stole the show. Tamim Iqbal (49), Soumya Sarkar (61), Sabbir Rahman (42), Mushfiqur Rahim (52), Mosaddek Hossain (75) everyone played run-fetching and responsible knocks to take their team s score to 467 at the end of the innings, gaining a lead of 129 runs. Lakshan Sandakan and Rangana Herath were at the top of their game as they bagged 4 wickets each.

It was a one-star show for Sri Lanka in the following innings. Though they started off well, not losing a single wicket on Day Three, Day Four went in favour of Bangladesh who dismissed 8 of the hosts wickets. The middle order failed to contribute at all and Sri Lanka gained lead based on Dimuth Karunaratne s lone effort of 126 runs. Mustafizur and Shakib ran through the middle order, reducing the team to 238 for 8. Tail-enders Lakmal and Dilruwan Perera built up a crucial partnership for Sri Lanka and took the lead to 190.

Chasing 191, Bangladesh lost a couple of wickets towards the start. Soumya Sarkar was sent back for 10 while Imrul Kayes followed him the next ball for a golden duck. Tamim Iqbal stuck around along with Sabbir Rahman and the two got drowning Bangladesh out of danger. Their partnership added 109 runs and made the target gettable. Tamim got out for 82 while Sabbir soon followed him for 41. Mehedi Hasan hit the winning runs as Bangladesh posted an emphatic victory.

Shakib Al Hasan was adjudged both the Man of the Match and Man of the Series. 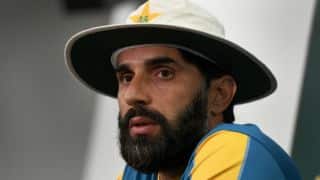