Pakistan were well placed at 203 for in the 39th over but they lost last eight wickets for just 47 runs, and got all out for 250.

Bangladesh pulled it back big time and managed to restrict a dangerous looking Pakistan to just 250 in the third One-Day International (ODI) at Dhaka. At one point point of time when Azhar Ali and Harris Sohail were at the crease, it seemed Pakistan will score well in excess of 300. But some reckless batting by their middle order and tight bowling by Bangladeshi spinners pushed them back. Though the major highlight of this innings was the classy and fighting hundred of Azhar Ali, who became the first Pakistani captain to score an ODI hundred since 2010.

This is a pressure game for Azhar both as a batsman and skipper as Pakistan are fighting to save a white-wash. With this knock, Azhar has proven his worth as a batsman. He got very good supports from his fellow opener, Sami Aslam, who is making his debut in this game and Haris Sohail, who scored a quick-fire 52 off 58 balls. Azhar’s hundred came in just 111 balls. On this slow wicket, it was a significant achievement.  Live Updates: Bangladesh vs Pakistan 3rd ODI

Pakistan were well placed at 203 for Two in the 39th over, with a set Azhar-Sohail pair at the crease. But the game changed completely, when Shakib al Hasan, who is playing his 150th ODI, got the wicket of the Pakistan captain. They lost their last eight wickets for just 47 runs, and got all out for 250, atleast 60-70 runs less what they were aiming at the midway stage of the innings. Live Streaming: Bangladesh vs Pakistan 3rd ODI

Before that, Pakistan had an excellent start of their innings. Their openers Azhar and Aslam came out with a lot of positive intent. On a slowish track, where the bowl was turning both of them attacked the Bangladesh new ball bowlers. This prompted Bangladesh skipper, Mashrafe Mortaza to introduced spinners early. Though it did not had any effect on the Pakistan openers.

The first wicket fell in the 18th over when Aslam got out to Hossain’s off-spin for 45. Mohammad Hafeez, who came in at No. 3 also did not last long. His poor form continued as the right-hander was cleaned up by the left-arm spin of Arafat Sunny. Form 91 or no loss, Pakistan were suddenly 105 for two. From there Azhar and Sohail took over and formed a 98-run partnership, which gave Pakistan the launching pad for the last 10 overs. But unfortunately for them, their efforts went in vain.

Earlier Pakistan skipper Azhar won an important toss and elected to bat first. With a rain forecast later in the day, the decision was highly questionable. Pakistan made three changes to the team that lost the last game. Rahat Ali, Sarfraz Ahmed and a out of sorts Saeed Ajmal are not playing. Umar Gul, Zulfiqar Babar and young Aslam replaced them. Bangladesh decided to field an unchanged side. 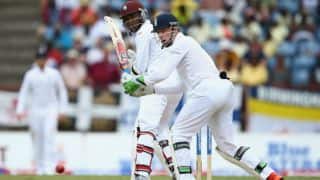