Bradley-John Watling led New Zealand's remarkable fightback with a gutsy century to leave the tourists in control of the first Test against Bangladesh in Chittagong on Thursday. 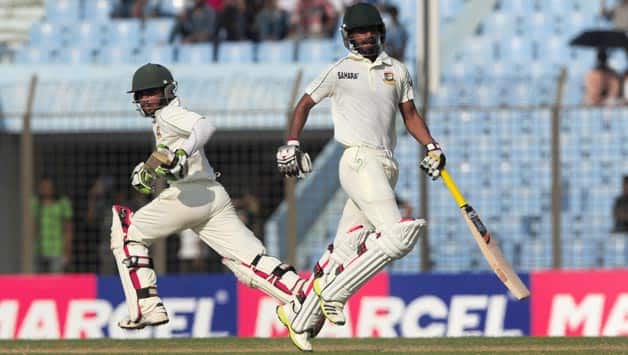 Bradley-John Watling led New Zealand‘s remarkable fightback with a gutsy century to leave the tourists in control of the first Test against Bangladesh in Chittagong on Thursday.

The South African-born wicket-keeper compiled a career-best 103 as the Black Caps recovered from 282-7 to post 469 all out by tea on the second day at the Zahur Ahmed Chowdhury stadium.

Bangladesh were 103-2 in reply at close, following a breathtaking counter-attack by 22-year-old Mominul Haque, who smashed an unbeaten 77 off 71 balls with 13 boundaries.

Mominul shared an unbroken third-wicket stand of 95 with debutant Marshall Ayub (21 not out) after two wickets had fallen for eight runs by the fourth over.

Bangladesh, who have lost eight and drawn one of their nine Tests against New Zealand, will need to match the rivals’ huge total if they are to avoid defeat in the first game of the two-match series.

Watling’s century was the cornerstone of the brilliant resistence by New Zealand’s tailenders that frustrated Bangladesh’s bowlers.

Number 11 Trent Boult also hit a personal best of 52 not out, helping Watling add a valuable 127 runs for the 10th-wicket on the newly-laid pitch that provided only slow turn.

“It was great fun batting with Trent out there,” Watling said. “I thought he played extremely well. He waited for the loose ball and played some nice shots through the onside.

“We played some good cricket and put Bangladesh under pressure. We were patient and managed to put on a good partnership together. It was needed because 400 is pretty much par on this wicket.”

Watling, who was on four when he was caught off a Rubel Hossain no-ball, prospered with the help of the tailenders and reached his second century with a six off Abdur Razzak.

His valiant effort ended just at the stroke of tea when he was stumped off Mominul, the eighth bowler deployed by Bangladesh during the innings.

Watling hit six boundaries and two sixes as he surpassed his previous best of 102 not out against Zimbabwe in Napier in January last year.

Boult breezed past his personal best of 33 with a six off Shakib Al Hasan and returned unbeaten as Watling was dismissed attempting to pick up the scoring rate.

The Black Caps, who resumed at the overnight score of 280-5, lost Bruce Martin and debutant Corey Anderson in the first two overs of the day to slip to 282-7.

Martin was caught behind from a thin edge off Rubel and Anderson edged Razzak to first slip, giving the left-arm spinner his third wicket in the innings.

But Watling and Doug Bracewell prolonged the innings by adding 57 for the eight wicket.

Bracewell gifted his wicket when he attempted a rash sweep off Sohag Gazi, missed the line and was bowled for 29.