Sachin Tendulkar on Friday created history by becoming the first batsman in the history of the game to score 100 international centuries but Bangladesh spoilt his party by posting an upset five-wicket win over India to throw open the Asia Cup tournament. 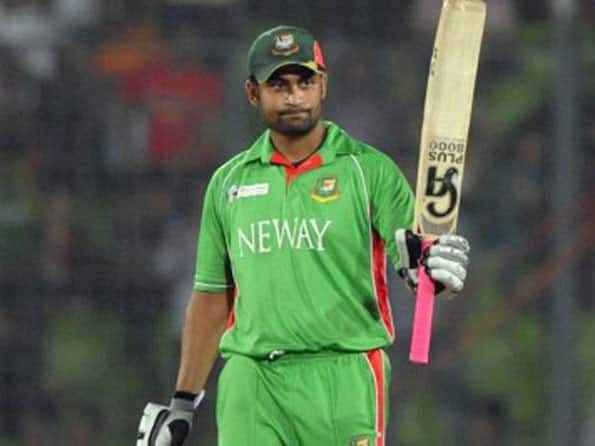 Sachin Tendulkar on Friday created history by becoming the first batsman in the history of the game to score 100 international centuries but Bangladesh spoilt his party by posting an upset five-wicket win over India to throw open the Asia Cup tournament.

Embellished with Tendulkar’s milestone knock of 114 runs, his 49th ODI century, India scored 289 for five but the hosts pulled off a stunning win with four balls to spare to send thousands of their fans into a frenzy at the Sher-e-Bangla national stadium.

The heroes of Bangladeshi win were opener Tamim Iqbal (70) Jahurul Islam (53) and Shakib Al Hasan (49) as they batted with sheer grit to pull the rug from under India’s feet.

Bangaldesh skipper Mushfikur Rahim hit a fiery 46 off 25 balls and Nasir Hossain supported him well with 54-run knock to record a shock win, their first against India since 2003 World Cup.

The hosts needed 37 off the last four overs but the match tilted in Bangaldesh’s favour when Irfan Pathan leaked 17 runs in the 48th over. Skipper Rahim hit two consecutive sixes in that over and then treated Praveen Kumar with the same disdain to script a historic win.

For India, apart from Tendulkar’s knock, Virat Kohli (66) and Suresh Raina (51) were the notable contributors for India.

India will now have to win their last league match against arch rivals Pakistan to entertain hopes of making it to the final.

It had been a long and agonising wait for Tendulkar to get to this century as pressure was piling on him to achieve the landmark ever since the disappointing England tour last year.

Exactly one year and four days since he scored his 99th hundred against South Africa during a World Cup match in Nagpur, Tendulkar neatly tapped a delivery from left-arm spinner Shakib Al Hasan behind square leg in the 44th over of the Indian innings to complete his landmark century.

It took him 138 deliveries to reach the three-figure mark, probably one of his slowest ODI tons, but the relief was palpable more than excitement and happiness of having achieved what was unthinkable even a decade ago.

After completing his century, he however opened up hitting pacer Sahadat Hossain for back to back boundaries as his partner Suresh Raina sent the opposition bowlers on a leatherhunt in favourable conditions as he smashed a quickfire 51 off 38 balls with help of five fours and two sixes.

Tendulkar was finally out in the 47th over when he tried to hit Mashrafe Mortaza out of the ground only to edge it to Mushfiqur Rahim behind the stumps. It certainly wasn’t the best of knocks which came with help of 12 boundaries and a six.

The pressure of reaching 100th hundred was evident as he took 36 deliveries after reaching 80 to his 100. There were times when he would try and go for quick singles only to be denied by the alert Bangaldeshi fielders who otherwise were pathetic in the outfield.

Bangladesh made a shaky start to the chase as they lost opener Nazimuddin (5) inside fifth over with Praven Kumar getting the breakthrough for the Indians.

However, Tamim Iqbal (70) and Jahurul Islam (53) raised a fighting 113-run partnership for the second wicket.

When all the options failed to break the partnership, skipper M S Dhoni turned to Ravindra Jadeja and the spinning all-rounder reponded with the wicket of Jahurul.

The asking rate mounted and in order to accelerate Tmil too fell. He became the second victim of Praveen, who had the Bangladeshi caught by Rohit Sharma.

Shakib Al Hasan and Nasir Hossain though refused to give up and rattled up a fiery 68-run stand for the fourth wicket to raise hopes of an upset win.

Shakib played a stellar knock, studded with five fours and two sixes but R Ashiwn scalped the former Bangladesh skipper by having him stumped.

Earlier, after being sent into bat, India lost Gautam Gambhir early as he played onto a Shafiul Islam delivery that was angled across.

Tendulkar and Virat Kohli (66) added 148 runs for the second wicket. During the earlier part of the innings, Tendulkar looked in fine touch as he hit some crisp shots on both sides of the wicket.

He lifted Shakib wide of long-on for his only six. He completed his 50 off 63 balls when he hit the former Bangal captain inside out over extra cover for a boundary.

Kohli, who has been in tremendous form since the tour of Australia also looked good for another three-figure mark as they scored runs with consumate ease.

Kohli, who was eyeing a hat-trick of ODI tons having scored back to back 100s in Hobart and at this very ground was left disappointed as he dragged a wide delivery from left-arm spinner Abdur Razzaq onto his stumps.

With ball hardly doing anything and the bounce which was below knee-roll, the situation was ideal for Raina to show his pyrotechnics. He played an innings so typical of him. Taking his frontfoot away to make room and the murder the length balls.

The Tendulkar-Raina partnership for the third wicket yielded 86 runs in a 10.5 overs which helped India reach a commendable total. It was skipper Mahendra Singh Dhoni (21 no, 11 balls, 2×4) who blasted a couple boundaries to take India past 280. (PTI)