The openers were off to a steady start and steered comfortably as they brought up the 300-run stand.

Bangladesh openers. Tamim Iqbal and Imrul Kayes registered the highest opening stand for a side of 312 runs as they lead by 19 runs, against Pakistan on Day 5 of the first Test of the two-match Test series, at Sheikh Abu Naser Stadium in Khulna on Saturday. Rain has interrupted the play for a while as the lunch break has kicked in. LIVE Scorecard: Bangladesh vs Pakistan 2015, 1st Test at Khulna, Day 5

Earlier, Pakistan started the day from where they had stopped on Day 4. With 273 for no loss, Bangladesh had already set high standards with their record-breaking opening partnership and left Pakistan bowlers biting their nails and scratching their heads as they were completely clueless on how to get rid of this pair, which was looking extremely dangerous. READ: Bangladesh break numerous records Day 4

The openers were off to a steady start and steered comfortably as they brought up the 300-run stand in 417 balls with Tamim contributing 149 and Kayes contributing 146, along with six extras, as they took the lead as well. Eventually, Tamim also scored his 2nd 150 in Test cricket off 202 deliveries including 14 fours and four sixes, along with a strike-rate of 74.25. He was followed by Kayes, who too scored his maiden Test 150 off 231 deliveries including 16 fours and three sixes, along with a strike-rate of 64.93. Live Updates: Bangladesh vs Pakistan, 1st Test, Day 5 at Khulna

However, right after scoring his maiden 150, Kayes was dismissed for the score off Zulfiqar Babar, who made him go big and was caught at the long off. It took 76 overs for Pakistan to get the first breakthrough. However, his dismissal led to the end of another record created on the final day as they registered the highest opening stand in the second innings for a side with 312 runs. Following Kayes’s dismissal, led to the arrival of Mominul Haque, but hardly he played a couple of overs, it was the rain that interrupted proceedings and the umpires had to walk off the field along with the players as the covers were in action along with the ground-staffs. As the rains failed to stop after 20 minutes, the umpires decided to go in for the lunch break as well. 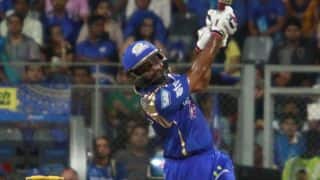