Sarkar was unbeaten on 88 from 79 balls, hitting 13 fours and one six.

Soumya Sarkar and Mahmudullah led a spirited run chase for Bangladesh as the hosts defeated South Africa by seven wickets in the second One-Day International (ODI) to level the three-match series at Dhaka on Sunday.

South Africa skipper Hashim Amla used six bowlers to tackle the Bangladesh batsmen, as poor bowling and dropped catches hurt the visitors. Faf du Plessis, one of South Africa’s safest hands, could not collect the catch of Sarkar, as he left the ball dropped in front of him.

Tamim Iqbal and Sarkar opened the batting for Bangladesh as Kyle Abbott bowled the first over. Sarkar was off the strike for a long time, having faced only one ball. Kagiso Rabada struck once again, as he removed Tamim off his first ball. Tamim had to face a bit of scuffle on his walk back as he had a collision with Rilee Rossouw. Rabada struck again, when he bowled Litton Das. Litton scored 17 off 14 balls.

Later on, Sarkar and Mahmudullah held the fort and steered Bangladesh’s innings. Mahumudullah was the last wicket to fall, immediately after he scored his half-century as Kyle Abbott took his wicket.

Seeking to stay alive in the three-match series after going down by eight wickets in Friday’s opening match, a spirited Bangladesh made regular breakthroughs to keep the visitors in check. Nasir finished with a career best 3 for 26 while Mustafizur grabbed 3 for 38 as South Africa were bowled out to their lowest score against Bangladesh on a slow pitch at the Sher-e-Bangla National Stadium.

Left-arm pacer Mustafizur struck first in the fifth over when he forced a leading edge from opener Quinton de Kock as Sabbir Rahman took a simple catch at backward point.

Rubel Hossain, who returned to the starting lineup for leg-spinner Jubair Hossain in Bangladesh’s only change from the opening match, made an instant impact by knocking the off stump off Hashim Amla (22).

South Africa began to feel pressure when Nasir bowled Rilee Rossouw off his first ball and Mahmudullah sent home David Miller forcing him to give a simple catch to Mashrafe Mortaza at short midwicket to leave the side wobbling at 74 for four. Faf Du Plessis, who looked solid holding one end, holed out a catch at long on to Soumya Sarkar off Nasir. His departure after the top-score of 41 from 64 balls firmly swung the game in favour of the local bowlers. Mustafizur deceived JP Duminy with an off-cutter forcing him to give a catch at short cover to Sabbir for 13 before Rubel trapped Chris Morris leg-before for 12.

Farhaan Behardien, who survived a leg-before decision against him after it was overturned by the TV umpire, resisted Bangladesh to score 36 before he became the last man to be dismissed.

Man of the Match: Soumya Sarkar 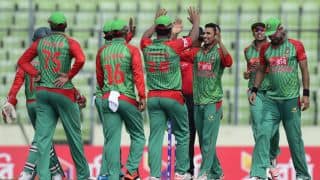