Bangladesh will host Zimbabwe and the West Indies for back-to-back series later this year, a senior Bangladesh cricket official said Thursday. Zimbabwe were originally scheduled to visit in January 2019 but the cricket board brought forward the tour to October avoid any potential clash with national elections. Bangladesh announced Wednesday that the West Indies would arrive on November 15 for their first full tour to the country since 2012.

The Zimbabwe tour dates have not yet been announced. 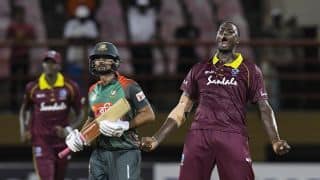