Bangladesh opening batsman Tamim Iqbal was forced to retire hurt with a thigh muscle injury, after facing just 13 balls on the first day of his team’s three-day match against a South African Invitation XI at Willowmoore Park on Thursday. Bangladesh made 306 for 7 decl. after winning the toss. The Invitation XI were 21 for one at the close. Tamim, a veteran of 51 Tests and the team’s all-time leading run-scorer, made five runs before leaving the field in the fifth over.

Team manager Minhazul Nanna said the batsman had suffered a strained right thigh muscle. He left the field as a precaution and his condition would be assessed on Friday following a scan. Bangladesh are already without leading all-rounder Shakib Al Hasan, who is being rested from the two-Test series against South Africa which starts next Thursday.

Mominul Haque, captain Mushfiqur Rahim and Sabbir Rahman made half-centuries for the tourists but Mahmudullah, who is hoping to make a comeback to the Test side after being dropped earlier this year, was out first ball to 19-year-old fast bowler Michael Cohen, who took four for 23. 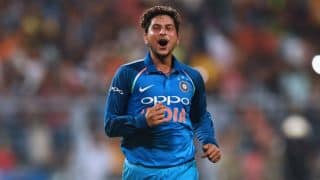