Bangladesh, replying to South Africa’s first innings total of 248, were 179 for 4 when rain stopped play.

Chittagong: Rain brought an early end to the second day’s play in the first Test between Bangladesh and South Africa in Chittagong on Wednesday. Bangladesh, replying to South Africa’s first innings total of 248, were 179 for 4 when rain stopped play for a second time moments after the game resumed at the Zahur Ahmed Chowdhury Stadium in the third session.  Match officials called off play at 4:50pm local time (GMT 10:50) with 25 overs left in the day. Tamim Iqbal and Mahmudullah Riyad hit half-centuries to guide Bangladesh to 153 for 3 at tea on the second day of the first Test against South Africa in Chittagong on Wednesday. Tamim made 57 off 129 balls while Mahmudullah remained unbeaten on 53 as Bangladesh reduced their first innings deficit to 95 runs after resuming second day’s play on 7 for 0. Part-time left-arm spinner Dean Elgar bowled local boy Tamim on the stroke of tea break to end his patient knock, which included only three fours. Tamim and Mahmudullah helped Bangladesh rebuild their innings after Stiaan van Zyl and Simon Harmer took a wicket each in the morning session. LIVE SCORECARD: Bangladesh vs South Africa, 1st Test at Chittagong, Day 2

Replying to South Africa’s first innings total of 248, Tamim and fellow opener Imrul Kayes mixed aggression with caution to blunt the new ball, scoring 41 runs in the first hour. Occasional medium pacer Van Zyl dragged Imrul out of his crease for Quinton de Kock to complete a stumping, breaking a resolute 46-run opening stand. Imrul departed for 26 after leading the initial charge with three fours. Spinner Harmer later took out Mominul Haque’s off stump after he had scored to leave Bangladesh struggling at 55for 2. Mahmudullah, who has so far faced 113 balls and hit seven fours, will resume the innings after the tea break with skipper and his brother-in-law Mushfiqur Rahim who is unbeaten on five. Live Blog: Bangladesh vs South Africa 2015, 1st Test at Chittagong, Day 2

Bangladesh, who have a dismal Test record, had made an impressive start to the match on the opening day on Tuesday against top-ranked South Africa. Pacer Mustafizur Rahman claimed 4-37 in his Test debut and leg-spinner Jubair Hossain added 3-53 as Bangladesh bowled out the Proteas for 248. The second match of the two-Test series will be held in Dhaka from July 30 to August 3. 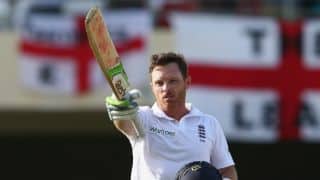 The Ashes 2015: Ian Bell to lose place if he fails in third Test, says Geoffrey Boycott