The Afghan also played in his country's two previous Test matches, helping his side record their maiden wins against Ireland in Dehradun in March.

Former Afghanistan captain Mohammad Nabi announced his retirement from Test cricket on Saturday after the ongoing one-off red-ball fixture against Bangladesh in Chittagong.

Nabi discussed the decision in a video statement released by the Afghanistan Cricket Board. “I have served Afghanistan for the last 18 years. It was my dream as well to help Afghanistan obtain Test status and that dream is realised now,” he said.

Experienced all-rounder @MohammadNabi007 announced his retirement from Test cricket confirming that the ongoing one-off match against @BCBtigers will be his last in the longest format.

The 34-year-old all-rounder said he would like emerging young players get chances in the long-format of the sport instead of him. “I want them to get the chance they deserve so that we have a good Test team in the future as well.”

Nabi has been a key part of Afghanistan’s rise in world cricket, featuring in 121 one-day internationals and 68 Twenty20 internationals.

The Afghan also played in his country’s two previous Test matches, helping his side record their maiden wins against Ireland in Dehradun in March.

His contribution in the ongoing Test is limited to so far scoring eight runs in two innings and picking three wickets giving away 56 runs after the third day of action.

Afghanistan are leading Bangladesh by 374 by after scoring 342 and 237-8 in two of their innings and bowling the home side out for 205 in between.

Nabi confirmed he will continue to represent his nation in the shorter formats. “I will strive to play ODIs and T20Is for Afghanistan as long as I am able to,” he said. 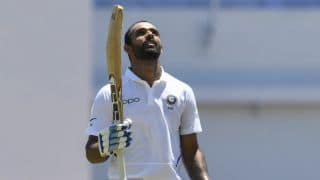