Bangladesh vs Afghanistan, BAN vs AFG Only Test, Day 5 LIVE streaming: Teams, time in IST and where to wat

Over 61.4: WICKET! That’s it, Afghanistan have done it. Bangladesh have been bowled out for 173 with Soumya Sarkar the last batsman to be dismissed. He scored 15.

Over 57.3: WICKET! Just a wicket left now. Afghanistan have gotten rid of Taijul Islam through Rashid Khan who also completes his five-wicket haul – second of the match and third of his Test career. He scored a duck. Bangladesh 166/9

Over 46.4: WICKET! And immediately after resumption, Zahir Khan strikes with the big scalp of Shakib Al Hasan who has been caught on 44. Bangladesh 143/7

Weather update: So the sun is out and groundstaff is working on getting the field ready for match. Covers are being taken off.

Play final gets underway. 63 minimum overs to be bowled today. Afghanistan four wickets away from win.

Lunch: So first session has been wiped out due to rain.

Sunshine: So the sun has finally come out on Day 5 raising hopes of a game after all.

Weather update: It’s drizzling as of now. Covers are on. Will be a delayed start to the final day.

Wrist spinners wreaked havoc on Day 4 to take Afghanistan closer to a famous win against Bangladesh, who were at 136/6 and still needing 262 to win in the one-off Test in Chittagong on Sunday.

Resuming at overnight score of 237/8 in 83.4 overs with a lead of 374, Afghanistan set Bangladesh a stiff target of 398 to win after start of play was delayed due to bad light. Wicketkeeper and overnight batter Afsar Zazai remained unbeaten on 48. For the hosts, skipper Al Hasan returned best figures of 3/58.

Bangladesh sent Liton Das to open the batting instead of Soumya Sarkar but to little effect as Das was out for nine, with Zahir Khan trapping him in front after lunch. Bangladesh kept losing wickets as Afghanistan skipper Rashid Khan removed Mushtiqur Rahim (23) and Mominul Haque trapped lbw. Rashid could have had another wicket had he managed to hold on to a sharp return catch off Al Hasan’s bat.

What: Bangladesh vs Afghanistan, Only Test, Day 5 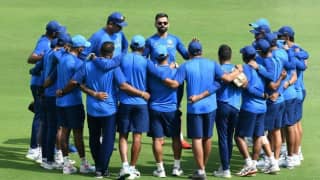