Shakib explained how it wasn t only the lack of application from his batsmen but the overall areas which Bangladesh need to work on.

Following Bangladesh s 224-run defeat to Afghanistan, captain Shakib Al Hasan has admitted his side needs to face their shortcomings if they are to get better at the international level. Bangladesh were below par with both bat and ball, firstly allowing Afghanistan to 342 in the first innings and later appearing clueless with the bat, getting bowled out for 205 and 173.

Shakib explained how it wasn t only the lack of application from his batsmen but the overall areas which Bangladesh need to work on in order to show an upward curve in their graph.

“It’s a combination of both – lack of application from our batsmen and the way they bowled. They deserve this win,” Shakib said after the post-match conference. “After playing for 20 years, we can’t say it’s a build-up process. It’s been a while since we played our last Test match, but Afghanistan kept the pressure on us, credit goes to their hard work. We need to forget this match soon and look forward to the T20I series. They are a very good side in that format, so we need to focus on the series, keeping the World T20 in focus.”

Bangladesh were dented severely by Rashid Khan, who picked up 11 wickets in the match and even scored a half-century in the first innings. Rashid s 5/55 and 6/49 in both innings crippled the Bangladesh batsmen. Shakib, realising his team s vulnerability against wristspin explained how it s one aspect his batsmen need to get better at.

“We have both technical and mental shortcomings. We are not used to playing any kind of wristspin, although we planned and prepared against our legspinners in the nets,” Shakib said during the press conference after the match. “Unless you are successful in the middle, that practice doesn’t work. I don’t think anything was wrong in the approach, but there are problems in our execution, or playing with a big heart.

“When you are fearful, your execution doesn’t quite come off. Liton hits everything well in T20s, but he couldn’t do it in Tests. The coach also said that we should play with a bigger heart. We play with a lot of pressure and fear. At the end of the day, it is a cricket match. But it is not everything. We end up taking so much pressure on ourselves, we make performing harder. And when we can’t perform, the pressure increases.”

Addressing batting woes, Shakib felt the quality of batting has taken a hit drastically. Experienced cricketers like Liton Das, Soumya Sarkar are playing careless shots and getting out, while some cannot get themselves out of the T20 mould.

“We have to find out what is wrong with the player first. I think it is wrong to expect the same medicine to work for everyone. Whether it is because they are playing in the NCL [National Cricket League], or not because of playing in the NCL. It could be both,” he said. “It maybe so that the bowling is so easy to play in the NCL that they end up hitting four or five double-hundreds, but when they come to international cricket, they can’t score four or five runs.”

Bangladesh went into the Test without a single frontline fast bowler and instead banking heavily on their spinners. Mustafizur Rahman was left out and only Sarkar was the closest to a pacer they had with his medium-pace. Shakib admitted it was a tactical blunder which hurt them dearly.

“I said before the Test match that the pace bowlers must deserve a place in the team,” Shakib said. “Interestingly, I was seeing their stats today, and their economy rate is 4.41. If they bowl 90 overs, they will concede 400. We are out of the game on the first day.

“If they bring it down to 2.8 or 2.9 and they have a good strike rate, we can pick them. Just check their stats from their home Tests in the recent past, and you will see what I mean.” 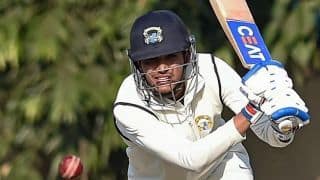 After exploits in Caribbean, Hanuma Vihari set his eyes on ODI spot