Australia need 156 runs to win, with 8 wickets in hand.

Victory looked certain for Bangladesh when they removed Matt Renshaw and Usman Khawaja in quick succession. Staring at a daunting target of 265 on a dustbowl, Australia were in the woods. However, against all odds, David Warner with the help of his captain Steven Smith counterpunched to draw Australia near the target, as his blazing 75* took them to 109 for 2 at the end of Day 3. They need another 156 runs to go 1-0 up -in two-Test series.

Australia made a terrific comeback after they slumped to 217 in the first innings, conceding only a 43-run lead. Nathan Lyon took a six-wicket haul to dismantle Bangladesh for 221. However, the target looked out of Australia’s reach, given the way they had batted earlier.

Bangladesh had reached 221 thanks to Tamim Iqbal’s resilient 78. Otherwise, they had failed to bat well as a cohesive unit. That said, had luck not evaded captain Mushfiqur Rahim, his team would have added a bigger target: Sabbir Rahman’s drive flicked bowler Lyon and ricocheted to the stumps, leaving Mushfiqur short of the crease. Towards the end, Mehedi Hasan’s 45-ball 26 added to Australia’s frustration.

Ashton Agar ended with figures of 2 for 55 amidst Lyon’s roar.

Bangladesh drew first blood in the ninth over. The in-form Mehedi ended Renshaw’s 19-ball resilience, catching him lbw. Usman Khawaja joined the fallen Australian in the very next over.

Despite the early hiccups, Warner went all guns blazing and brought up his 25th half-century. Along with Smith he added 91 runs for the third wicket at the end of day’s play. 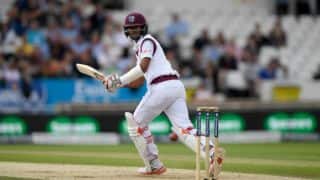