The live cricket streaming of Bangladesh vs Australia 2017, 1st Test at Dhaka, Day 2, will be available on Hotstar.

Bangladesh’s spinners spoilt a strong day for Australia on Sunday, claiming two quick wickets after the hosts had been dismissed for 260 on the first day of the first Test. Pat Cummins, Nathan Lyon and Ashton Agar took three wickets each to wrap up the Bangladesh innings despite half-centuries from Tamim Iqbal and Shakib al Hasan. But there was redemption for Bangladesh meeting Australia in a Test for the first time in over a decade when their spinners took two scalps in the final moments of the session. A third batsman was run out, leaving Australia precariously placed on 18-3 at stumps. 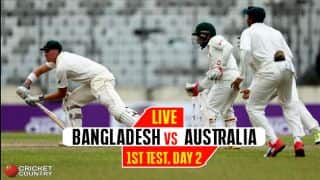