This will be the second match for both sides at The Oval, London, where the weather has not played a major role.

Australia have managed to get themselves out of a hole and straight onto an edge of a cliff after the Group A encounter between them and New Zealand was called off due to rain. Steven Smith and his men are now in danger however marginal of getting eliminated from the tournament. They now face Bangladesh who got thrashed by hosts England in the opening encounter of the ICC Champions Trophy 2017. This will be the second match for both sides at The Oval, London, where the weather has not played a major role. The conditions will thus have no bearing here. Full Cricket Scorecard: ICC Champions Trophy 2017, Australia vs Bangladesh, Match 5 at The Oval

Australia will hope for a clear day. The head-to-head tally clearly favours the men from Down Under; who have won 18 of 19 times the sides have clashed. Their only loss against Bangladesh had come in 2005 courtesy Mohammad Ashraful. Even at neutral venues Australia have the upper hand having won 4 of the 5 games both sides have featured.

Bangladesh s biggest chance lies in a truncated match, for the shorter the duration of the match, the more likely the weaker side is to pull off an upset. They will be also be happy because their only win came in England. To add to that, of the two sides in their initial matches, Bangladesh had looked more assured with bat against England than Australia had against New Zealand.

As mentioned by Steven Smith in the post-match conference, his bowlers were guilty to spraying the ball on both sides of the wicket: We bowled both sides of wicket. We gave them a lot of freebies. And it was pretty ordinary, to be honest with you.

Against New Zealand only Mitchell Starc found movement in the air. Josh Hazlewood did manage to record a 6-wicket-haul, but New Zealand s poor shot selection had to do with that. It will be interesting to see whether the Australian management stick to Pat Cummins who was cantered across the park.

Adam Zampa can get a look-in, which will lend variation to the bowling unit. The Australian batting order looks solid on paper but they had a tough time against the New Zealand seamers. The likes of David Warner, Aaron Finch and Moises Henriques lashed out at everything with scant respect for conditions.

Just a day before the match, Warner had asked his teammates to play with caution and not swing their bats wildly: There were, I think, a few rushed overs there especially in the first 10 [overs]. We probably didn’t allow ourselves to actually pick off the ones and twos and play normal cricket shots.

Bangladesh, on the other hand will be happy with their batting unit in totality. With Tamim Iqbal and Mushfiqur Rahim going great guns against England, their top order looks reasonably strong. Soumya Sarkar, Imrul Kayes and Shakib Al Hasan also got starts but failed to make it count in the middle failing to false shots.

However, their middle order will be tested by Australia s raw pace. Bangladesh will ideally want to play the extra bowler and drop a batsman. [In the] first match we decided to go with eight batters, but we have to think about it. The main bowlers must bowl better, quipped Mashrafe Mortaza. Mehedi Hasan Riaz will be keenly looked forward, possibly in place of Mosaddek Hossain.

Mortaza, Rubel Hossain, Mustafizur Rahman and Taskin Ahmed will look to have a much better time this time around as opposed to their outing against England. 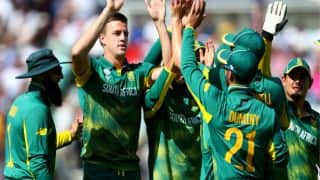 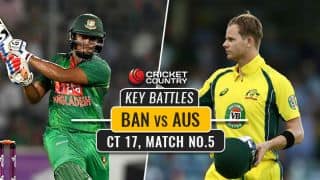