Bangladesh will now take on the might of England in a 2-Test series which will be the real test of their character and skills. England once again will be led by Alastair Cook and see the return of stalwarts like Joe Root, Stuart Broad and Mark Wood, which makes the visitors a formidable opponent. Bangladesh on the other hand, last played their Test against South Africa in 2015, which is a testimony to how good a side they are in that format. Not to underestimate Bangladesh with their platter of left-arm spinners, they make for a dangerous attack on homegrown pitches. The home side will be skippered by Mushfiqur Rahim, who has been their most famed and popular batsmen in the recent past. FULL CRICKET UPDATES: Bangladesh vs England, 1st Test at Chittagong

England on the other hand, have one of most settled batting line-ups doing the rounds in international cricket. Cook is all set to become England s most Test capped player and also looks ready to smash a few records on the tour. Root who was rested for the ODI series makes a come-back and will eye good practice time in the middle and pile on a few runs along the way. Gary Ballance who has been irregular with his form has again been given a chance to prove himself on international stage. Buttler, who has been on a batting high making runs by the loot in the ODI, will look to continue his form in the longer format. Jonny Bairstow who struggled with the bat in the ODI will want to get back to scoring, as he forms a vital cog of England s batting in the lower middle order. Bangladesh vs England 2016, 1st Test at Chittagong, Preview and Predictions

England s spinning duties will be handled by Moeen Ali, Adil Rashid and Gareth Batty. Batty is making a return into the Test arena after a gap of 12 long years. Batty was cantered by Brian Lara in his last outing and will be hoping not to rekindle the same bowling form. Moeen with his batting and bowling has been crucial in getting England out of trouble in many matches only to be found underappreciated by many. Rashid will hope he continues his wicket taking form from the ODI series and into the Tests. Rahim: Bangladesh ready to take on England in Test cricket

Bangladesh s batting unit is inexperienced but has oodles of talent in it. Tamim has been their most successful opener in the ODI and will want to provide his team with a steady and settled start. Imrul Kayes has looked promising in the ODI series and will want to stamp his authority here as well. Sabbir Rahman has an average of 30.20 in ODI which is not extraordinary but is not bad either for a player who has played just 26 games. Rahman will hope to show his batting prowess once in the middle on his debut. Skipper Mushfiqur will have to lead the batting unit if Bangladesh have any chance of beating the visitors. 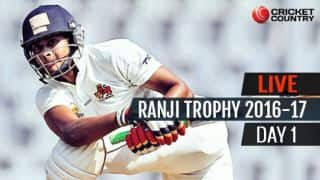