Shakib Al Hasan is the leading wicket taker for Banlgadesh in Test cricket with 151 scalps to his name.

Bangladesh collapsed with their bat on the start of Day Three but soon were into the game with Shakib Al Hasan running havoc on the England batsmen. Shakib who failed with the bat in the first innings made it up with his terrific bowling. Shakib started the batting collapse for England picking the crucial wicket of Joe Root and Ben Duckett in their second innings. England are just ahead in terms of the situation of the match leading the first Test by 92 runs in their second innings at 47 for 4. LIVE Cricket Scorecard: Bangladesh vs England 1st Test at Chittagong

Shakib picked trapped Root plum in front for just one run. Shakib’s second wicket came in the form Duckett who was caught by Mominul at short-leg. Duckett added 15 runs to the teams total. Shakib had also picked 2-wickets in the first innings getting Alastair Cook for 4 and Ben Stokes for 18. Shakib in the start of the match was on 147 wickets. Shakib has 151 wickets in Tests and 65 wickets in Twenty20 Internationals (T20Is) to top the list for his country. He is also the highest Bangladesh wicket-taker in One-Day Internationals (ODIs) with 207 wickets beating Abdur Rezzak.

Bangladesh earlier had a disappointing end to their steady-looking innings, losing 5 wickets soon after Day Three s game started. England, who initially looked to have the advantage having bowled out the hosts for 248 and acquiring a lead of 45 runs, but later were left struggling at 64 for 5 at time of publishing this report. 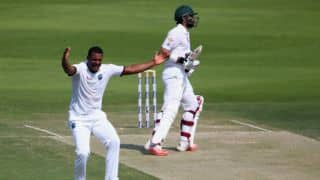