Bangladesh were in complete command, as they ended the day at 542 for 7 against New Zealand.

Shakib Al Hasan and Mushfiqur Rahim s 359-run partnership reduced New Zealand to nothingness on Day Two of the 1st Test at The Basin Reserve, Wellington. Bangladesh were in complete command, as they ended the day at 542 for 7. Shakib, however, fell for 217, their highest score by a Bangladeshi player. Meanwhile, Mushfiqur added 159. Shakib and Mushfiqur s record-breaking partnership surpassed the 312-stand between Tamim Iqbal and Imrul Kayes against Pakistan two years ago. It was also the highest fifth-wicket stand against New Zealand by any team. The live cricket streaming of the first Test between Bangladesh and New Zealand will be available on Sky Go.

Apart from scoring a double-century, Shakib got yet another milestone of reaching 3,000 Test runs. He became the highest scorer (3,146) for Bangladesh surpassing Tamim’s 3,405. The rains disrupted Day One, helping New Zealand take early wicket of Mominul Haque (64). Shakib was dropped by Mitchell Santner on 4 during Day One, and on Day Two, he was dropped by Ross Taylor for 189. He also survived a leg-before appeal on 137. Neil Wagner broke the ever-growing partnership.

Mushfiqur would have been picked by Trent Boult when an edge brushed past the stumps, but the bails stayed and the ball headed for a boundary. Later, Boult claimed the wicket of Mushfiqur, edging it towards BJ Watling.

Mushfiqur faced 260 deliveries, cracking 23 fours and a six. Shakib batted for 7 hours, 237 deliveries, and smashed 31 fours. Amongst the New Zealand bowlers, Wagner scalped 3 wickets, while Boult and Southee shared 4 wickets at the end of Day Two. 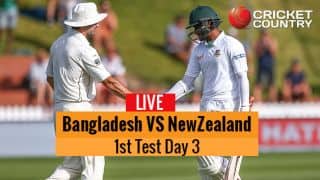