The live cricket streaming of the first Test between Bangladesh and New Zealand will be available on Sky Go.

New Zealand replied strongly against Bangladesh, after the visitors posted a huge score of 595 for 8 on Day Three of the first Test at Basin Reserve, Wellington. Bangladesh, who began their day at 542 for 7 later declared after losing Taskin Ahmed. Sabbir Rahman remained unbeaten at 54. In reply, Kiwis started decently and ended the day’s play at 292 runs for 3. The live cricket streaming of the first Test between Bangladesh and New Zealand will be available on Sky Go.

It was opener Tom Latham, who made batting look easy as he went on scoring a stunning 119 not out. His opening partner Jeet Raval could score only 27 before falling to Rabbi. Besides them, skipper Kane Williamson scored 53, followed by veteran batsman Ross Taylor’s contribution of 40. After them, Henry Nicholls remained not out on 35, and will resume his innings along with Latham on Day Four. Apart from Latham and Nicholls, other three Kiwi batsmen scored at a strike rate of above 69. Williamson’s half-century came in just 55 balls, while Taylor’s 40-run knock came in 51 deliveries.

After looking at the strike rates of these players, batting surely looks pretty easy. But since it is going to be the fourth day of the match, some turn can be expected, although the probability still directs towards a draw. Latham will look to convert his hundred into a double-ton, which he is yet to achieve in his career. On the other hand, Nicholls will aim for his maiden hundred. Angelo Mathews: This is the worst defeat as captain 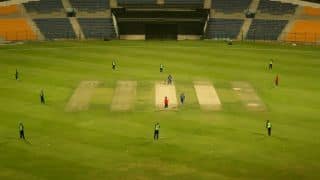