The live cricket streaming of the first Test between Bangladesh and New Zealand will be available on Sky Go.

The live telecast of Day Five of the first Test between New Zealand and Bangladesh, at Wellington, will be available on Sky Go. Bangladesh are in a tricky situation despite having taken the first-innings lead. Bangladesh took a lead of 56 runs after bowling out hosts 539. But three quick wickets towards the end of the day have put them in a spot of bother. The tourists lost the wickets of Tamim Iqbal, Mahmudullah and night-watchman Mehedi Hasan, and to make matters worse for Bangladeshi, their opener Imrul Kayes was stretchered off early in the second innings.

New Zealand should consider them having an upper hand by the end of Day Four despite falling 56 runs short of the Bangladesh’s first-innings total. The visitors had a disappointing end to Day Four, particularly considering the discipline they showed with the ball. In the initial stage of Day Four, Kamrul Islam Rabbi and his accurate bouncers were particularly hard to deal with for the Kiwi tail-enders. He struck Wagner on the shoulder once, and then on his helmet. But when it comes to their batting, top order has been disappointing. However, they should be happy that their skipper Mushfiqur Rahim will be available on the last day.

Mushfiqur was seen padded up on Day Four. Rahim and Shakib-Al-Hasan will have to emulate what they did in the first innings. 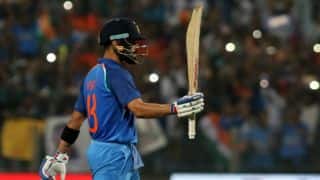