New Zealand in the post-lunch session were on the money most of the time as Bangladesh batsmen struggled to cope with the windy conditions present at Basin Reserve in Wellington. If it was Tamim Iqbal in the first session, the second session by far belonged to Mominul Haque who kept the hosts at bay. New Zealand’s bowling looked wayward at time with Trent Boult being the most guilty. Mominul cantered New Zealand s pace battery to good affect taking his team to 119 for 2 at tea on Day Two as rain again played it’s part in disrupting the session after 18 overs..

Tamim continued from where he left in the first session scoring boundaries at force to notch up an eye pleasing half-century. Tamim got to his fifty in 48-balls that included 10 fours. Tamim soon departed after getting to a adventurous innings on 56. Boult who was having a poor outing in the first session made up and got New Zealand the much-needed breakthrough.

Tamim was not lucky the second time as DRS this time came in favor of the bowler. Tamim got struck on his pads right in front of middle stump. Bangladesh s batsmen in form in New Zealand Mahmudullah came out to bat at No.4.

Mominul Haque on the other hand continued his patience game and meandered himself to runs. Mominul struck Boult for 3 boundaries in 20th over. Mominul marched on towards runs while Mahmudullah leisured his way to a couple of boundaries.

For, New Zealand it was Neil Wagner and Tim Southee that kept the noose on the batsmen and made it difficult for runs to flow off the bat.

As seen in the first session rain continued to disrupt the play that halted the session progress. Mominul just before the rain break spanked Southee for 10 runs in 2 balls off a massive six and a four.

Mominul looks all set to converge upon his 11th half century in Tests. Batting along side him is Mahmudullah who fortunate has just got his eye in. The pair also brought up their 50-run stand in 87 balls.

Going into tea Bangladesh were comfortably placed at 119 for 2 with Mominul batting on 48* alongside Mahmudullah on 13*. 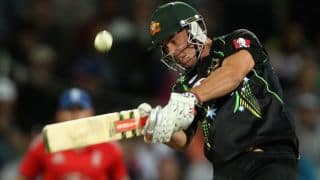