Soumya Sarkar was caught by Corey Anderson off the bowling of Daniel Vettori.

Bangladesh batsman Soumya Sarkar scored his maiden One-Day International (ODI) half-century during their 37th ICC Cricket World Cup 2015 Pool A match against New Zealand at the Seddon Park in Hamilton on Friday. He was however, dismissed almost immediately after bringing up the milestone, attempting to smash Daniel Vettori over long-on, getting caught by Corey Anderson near the boundary rope in the process however. The dismissal brought an end to the 90-run stand for the third wicket between Sarkar and Mahmudullah. Live Scorecard: Bangladesh vs New Zealand

With both teams having already qualified for the quarter-finals, it will be an inconsequential match for New Zealand and Bangladesh. While New Zealand have won all of their games played in the tournament so far, including a narrow one-wicket win against co-hosts Australia in Auckland, Bangladesh have shown a tremendous improvement in their quality of cricket by qualifying for the quarter-finals for the first time. They posted a 15-run win against England, knocking the latter out of the competition in the first round itself. ICC Cricket World Cup 2015: Complete 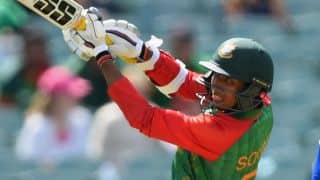 Bangladesh vs New Zealand, ICC Cricket World Cup 2015 Pool A match at Hamilton: 100 up for Bangladesh in 25th over