BAN vs NZ, Match 9, Cricket World Cup 2019, LIVE streaming: Teams, time in IST and where to watch on TV and online in India

BAN vs NZ, Match 9, Cricket World Cup 2019, LIVE streaming: Teams, time in IST and where to watch on TV an

That wicket made Shakib only the fifth player behind Sri Lanka s Sanath Jayasuriya, South African Jacques Kallis, and Pakistan pair Shahid Afridi and Abdul Razzaq to reach the landmark of 5,000 runs and 250 wickets in ODIs.

Weather: Cloudy skies with a maximum temperature of 19 degrees Celsius

You can also follow LIVE coverage of the match on CricketCountry (SCORECARD: Bangladesh vs New Zealand)

Having begun on a winning note, Bangladesh will not want to tinker with their combination and will look to go ahead with the same XI.

New Zealand did not miss pace spearhead Tim Southee, recuperating from a calf injury and top-order batsman Henry Nicholls (hamstring) in their opening game. Matt Henry, who replaced Southee, took three wickets in Sri Lanka s 136 all out, while openers Colin Munro and Martin Guptill knocked off the 137 required in just 16.1 overs. 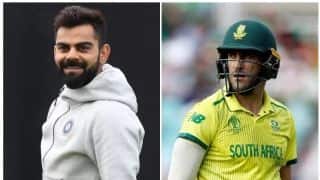 IND vs SA, Match 8, Cricket World Cup 2019, LIVE streaming: Teams, time in IST and where to watch on TV and online in India