New Delhi: Bangladesh wicketkeeper Mushfiqur Rahim will miss the remaining two one-day internationals against New Zealand with a hamstring injury. The first-choice stumper, also a key middle order batsman, suffered the injury during his team’s defeat by 77 runs in the Boxing Day match at Christchurch. “We are looking at two weeks, anything before is a bonus,” Bangladesh coach Chandika Hathurusingha told reporters on Wednesday. “He’s been one of the form batters as well as wicketkeeper in all formats, but injuries are part and parcel of the game.” Rahim’s injury cleared the decks for reserve wicketkeeper Nurul Hasan’s one-day debut in the second match at Nelson on Thursday. Beginning on Jan 3, Bangladesh play three Twenty20 matches in New Zealand followed by tests at Wellington (Jan. 12-16) and Christchurch (Jan 20-24).

Earlier, Bangladesh were fined for maintaining a slow over-rate during their 77-run defeat against New Zealand in the opening One-Day International (ODI) of the three-match series at the Hagley Oval in Christchurch. Chris Broad of the Elite Panel of ICC Match Referees imposed the fine after the Mashrafe Mortaza-led side was ruled to be one over short of their target when time allowances were taken into consideration.

In accordance with Article 2.5.1 of the ICC Code of Conduct for Players and Player Support Personnel, which relates to minor over-rate offences, players are fined 10 per cent of their match fees for every over their side fail to bowl in the allotted time, with the captain fined double that amount. As such, Mashrafe has been fined 20 percent of his match fee, while his players have received 10 percent fines. 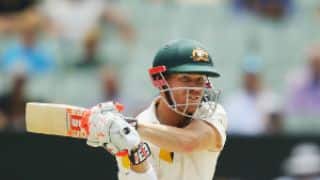