While New Zealand will be relaxed after becoming the first team to qualify for the semi-finals, Bangladesh will look to end a tragic campaign on a winning note.

Match No. 28 of the T20 World Cup 2016 between New Zealand and Bangladesh at Kolkata is a battle between two teams who are at the opposite end of the table. While New Zealand have already qualified for the semi-finals with comprehensive victories over India, Australia and Pakistan, Bangladesh have gone down to the same teams, thus crashing out of the tournament after successfully qualifying for the Super 10 round. Though the game is only of academic interest, both the teams will look to win. While New Zealand will look to keep the winning momentum going, Bangladesh will hope to end the tragic campaign on a winning note and give their passionate fans back home something to cheer for. FULL SCORECARD:New Zealand vs Bangladesh, 28th T20 Match, Super 10 Group 2

New Zealand have looked every bit the team to beat in their first assignment post Brendon McCullum. His imprint is pretty much evident on this team, which continues to play his brand of aggressive cricket, thus takes his legacy forward. Starting as perennial dark horses, New Zealand have quickly become the title favourites after beating hosts and the main contenders India, traditional rivals Australia and the unpredictable Pakistan. Under Kane Williamson, they have acclimatised well to the conditions and are playing exceptional cricket at the moment. With a settled batting unit and a performing spin trio of  Nathan McCullum, Ish Sodhi and Mitchell Santner, the team looks well on course for its first World title. READ: New Zealand vs Bangladesh, T20 World Cup 2016: Likely XI for New Zealand

On the other hand, Bangladesh’s campaign has been a tragic one. From the ban on Taskin Ahmed and Arafat Sunny, due to suspect bowling action to the heartbreaking one run loss against India, nothing has gone in their favour in this tournament. One has to feel for the side, which lost its prime weapons at a wrong time and lost the match against India after dominating it for a almost the whole time. “Leave out the last three balls, we played brilliantly. We did everything to win otherwise. We came back after they had two good overs towards the end. We played well at nearly every moment,” were Bangladesh skipper Mashrafe Mortaza’s words at the post-match media interaction put things into perspective. The last match against New Zealand will be a good chance for the ‘Tigers’ to show the world what they are made of. A win here will act as a soothing balm to the millions of enthusiastic supporters they have across the globe. 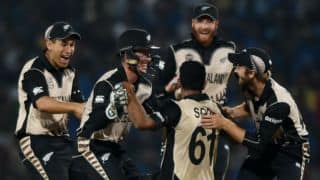