Both the teams will fight fire with fire in order to reserve a berth in Super 10s and stay alive in the tournament.

Catch the live streaming of ICC World T20 2016’s 12th match, First Round group A, between Bangladesh and Oman at starsports.com. Both the teams have had a similar run in the tournament so far and their fate entirely depends on this game. Bangladesh won their first game against Netherlands in a nail-biting encounter by eight runs. Their bowlers did a commendable job in restricting Ireland while defending a target of 154 runs. The high on confidence Bangladesh side didn’t get a chance to lock horns with Ireland as the game was washed out. Cricket fans all over the world can catch the live scorecard at the following link: Live Cricket Scorecard: Bangladesh vs Oman, Match 12, First Round Group A

Oman on the other hand defeated Ireland in their first encounter as they won the game by couple of wickets and were unlucky to miss out on the next game as it was washed out.  Oman has transformed as a team and if they manage to win this game they will surely write their name with gold in the history of cricket. It will be a test of their temperament as Bangladesh on paper look a formidable side and are coming into the tournament after a splendid run in the Asia Cup T20 2016. Looking at the form, both the sides are evenly balanced and the winner of this game takes it all. They will aim to put their best as this is a do or die situation for both of them. Catch online streaming and latest match updates of this match on starsports.com. 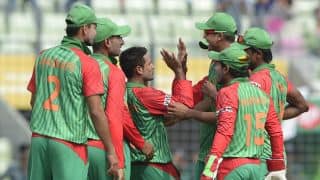