After 8 overs Pakistan are 50 for no loss.

Pakistan openers skipper Azhar Ali and debutant Sami Aslam gave Pakistan a steady start in the third and final One-Day International (ODI) of the the three match series against Bangladesh at Dhaka. Pakistan are fighting to save a white-wash here as the hosts have already won the first two games of the series. After 8 overs Pakistan are 50 for no loss. Catch live cricket scorecard and ball-by-ball commentary of Bangladesh vs Pakistan 3rd ODI at Dhaka here 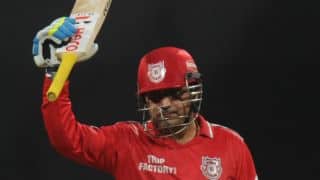