One off South-Asian giants, Pakistan, face off against minnows, Bangladesh in the first of the two-match Test series at the Sheikh Abu Naser Stadium in Khulna on Tuesday. Pakistan, who have had a dreadful ODI series would look to bounce back in the longest format of the game and prove themselves worthy of being called the South-Asian giants. LIVE Scorecard: Bangladesh vs Pakistan 2015, 1st Test at Khulna, Day 1

It will be futile to say that despite their good form, Bangladesh would have an easy walk over Pakistan, in the Test series. With the match being played at Khulna, it is most likely to suit batting. The first Test can be expected to be an interesting encounter between the two. Live Updates: Bangladesh vs Pakistan 2015, 1st Test at Khulna, Day 1

Live streaming is fast becoming a rage in the world as the cricket fans who do not have access to television sets and live cricket scores can follow the matches on the internet. There are many websites which are offering cricket matches live streaming, but people searching for the links will have to be careful so that they do not end up getting into objectionable content. 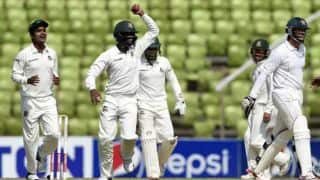 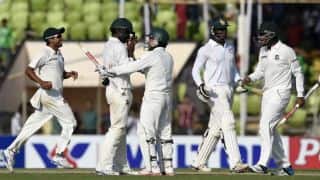