Bangladesh face off against Pakistan in the all-important first of the two-match Test series at the Sheikh Abu Naser Stadium in Khulna on Wednesday. Bangladesh are looking really strong following their 3-0 whitewash over Pakistan in the just concluded ODI series. Live Scorecard: Bangladesh vs Pakistan, 1st Test, Day 3 at Khulna

The post-tea session saw a good game-play from the Pakistan batsmen as the on crease batsmen continued to bat through out the remaining session and put up a 127-run stand. During the innings, Hafeez scored his eighth Test century and also became the oldest opener in Tests cricket to score a century. LIVE Updates: Bangladesh vs Pakistan 2015, Day 3 at Khulna

Live streaming is fast becoming a rage in the world as the cricket fans who do not have access to television sets and live cricket scores can follow the matches on the internet. There are many websites which are offering cricket matches live streaming, but people searching for the links will have to be careful so that they do not end up getting into objectionable content. READ: Bangladesh have the edge over Pakistan at the end of Day 1

There are many websites offering live streaming but they are not entirely reliable. The user, thus has to be very careful in picking the right website. . There are many who misdirect their viewers to objectionable content. Hence, it becomes important for the users to remain aware of what they are browsing and refer only to the official websites which are offering live streaming of cricket matches. READ: How Pakistan turned things around on Day 2 of 1st Test vs Bangladesh 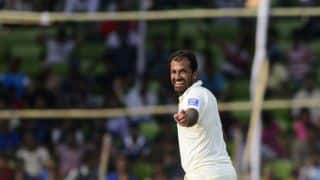