Catch the live streaming of the first day of the second Test here.

Bangladesh and Pakistan face off on the opening day of the second and final Test at the Sher-e-Bangla Stadium in Mirpur, Dhaka on Wednesday. The two-match Test series is currently level between the two sides, due to the first Test heading for a draw. Live Updates: Bangladesh vs Pakistan, 2nd Test at Dhaka, Day 1

Pakistan failed to break their winless streak after gaining a 296-run lead at the end of their first innings, in which they were bowled out for a score of 628. They however lost the plot when Tamim Iqbal and Imrul Kayes slammed centuries to put up a 312-run opening stand in their second innings, with Bangladesh reaching a score of 555 for six before play was called off on the final day. Live Scorecard: Bangladesh vs Pakistan, 2nd Test at Dhaka, Day 1

Pakistan have called in Bilawal Bhatti as a backup for Rahat Ali for this game. However, any change in their playing XI is highly unlikely. The pitch at Dhaka is expected to be another batting paradise, so the batsmen are expected to do well here. 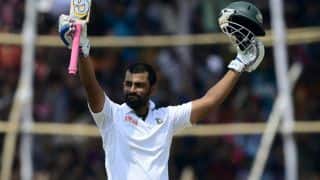