Both Mominul and Mahmudullah put-up a 95-run stand for the third wicket.

Minnows, Bangladesh, take on one-off South-Asian giants, Pakistan, in the all-important first of the two-match Test series at the Sheikh Abu Naser Stadium in Khulna on Wednesday. Pakistan, having lost the ODI series 3-0 to Bangladesh would definitely look to bounce back in the Test series. Live Scorecard: Bangladesh vs Pakistan, 1st Test, Day 2 at Khulna

Mominul scored his eighth half-century in Test cricket, off 108 deliveries including four boundaries along with a strike-rate of 46.29. Even Mahmudullah was going strong, and just when it seemed he would reach his half-century as well, he was dismissed unfortunately on 49 by Wahab Riaz after being edged to the keeper. Both put-up a 95-run stand for the third wicket. LIVE Updates: Bangladesh vs Pakistan, 1st Test, Day 2 at Khulna

Following his dismissal, it was the pair of Mominul and Shakib Al Hasan, who took charge of almost rest of the session. They brought up the 200 for Bangladesh as well. However, it was in the last over of the day, when Mominul was trapped leg-before to Zulfiqar Babar and was dismissed for 80, as they end of day’s play was announced. READ: Bangladesh have the edge over Pakistan at the end of Day 1 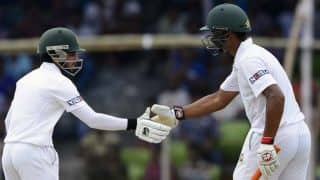