After an one-sided day of Test match cricket, Pakistan finished Day Two of the Dhaka Test, miles ahead of their opponent. First Azhar Ali and Asad Shafiq almost batted Bangladesh out of the game, later the bowlers took five top-order Bangladeshi wickets and reduced them to at stumps 107 for 5. They are still 450 runs ahead and hosts need 251 to save the follow on. Live Scorecard: Bangladesh vs Pakistan, 2nd Test Day 1

In the early part of the day, 30 year old Azhar hit a maiden double-century and Shafiq scored his sixth ton in this format, as Pakistan reached 557 for eight by Tea. After losing Misbah ul Haq in the second over of the day, the fifth wicket stand between Azhar and Shafiq produced valuable 207 before Pakistan lost four wickets in the space of 27 runs just before Tea. Misbah decided to declare straight after Tea and his bowled proved his decision right. In their reply Bangladesh were tottering at 107 for Five at stumps on Day 2. Live Updates: Bangladesh vs Pakistan, 2nd Test, Day 3 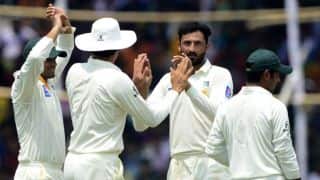 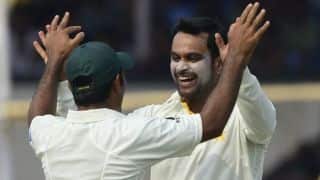 Bangladesh struggling to avoid follow-on in 2nd Test against Pakistan