The prolific off-spinner became the most high-profile casualty of the International Cricket Council‘s (ICC) crackdown on illegal actions when he was suspended from the game last September. READ: Saeed Ajmal banned from bowling by ICC

The 37-year-old was cleared to bowl again in February just before the ICC Cricket World Cup 2015 co-hosted by Australia and New Zealand, but was not picked for the showpiece event where Pakistan lost to eventual champions Australia in the quarter-finals.

Ajmal’s effectiveness with a reworked action will be tested during the month-long tour of Bangladesh which comprises three one-day internationals, a solitary Twenty20 game and two Tests.

“It was torture living without cricket,” Ajmal told AFP ahead of the tour. “I am confident of bowling as effectively as I used to before the suspension.”

Pakistan will hope their main strike bowler, who has taken 178 Test, 183 one-day and 85 Twenty20 wickets, will deliver in all three formats on the traditionally slow pitches in Bangladesh.

With skipper Misbah-ul Haq and senior pro Shahid Afridi having retired from the One-Day Internationals (ODI) format after the World Cup, Pakistan named batsman Azhar Ali as captain for the three-match series starting on Friday.

Ali, who has not played one-day cricket since 2013, leads a new-look team that includes just five players who featured in the World Cup. But the experienced Mohammad Hafeez returns to the side along with Ajmal.

Pakistan were hit by injuries to two of their World Cup squad, batsman Sohaib Maqsood and fast bowler Sohail Khan, prior to the tour and on Thursday leg-spinner Yasir Shah was ruled out with a hand injury.

Meanwhile, Bangladesh were bustling with confidence after making the World Cup quarter-finals even though they have beaten Pakistan just once in 47 games across all formats.

The lone victory came during the 1999 World Cup at Northampton, England, when Pakistan lost a group match by 62 runs even though they went on to reach the final.

“I think we should be starting as favourites to win the one-day series,” said Shakib. “This is our best chance to win against Pakistan. If we play our best cricket, we can beat any side at home.”

Shakib will lead Bangladesh in the first one-dayer in the absence of regular captain Mashrafe Mortaza, who is serving a one-match ban for slow over-rates during the World Cup.

Fast bowler Mortaza will return for the second and third matches on April 19 and 22. The Twenty20 International (T20I) match will be held on April 24, before the two-Test series starts on April 28. All matches will be played at the Sher-e-Bangla Stadium in Dhaka, except the first Test which will be held in Khulna. 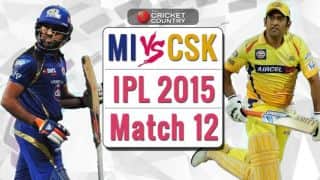