Tamim Iqbal and Mahmudullah top-scored for Bangladesh with knocks of 83 and 81 respectively.

Bangladesh were bowled out on a score of 246 after 49.5 overs during their warm-up match against Pakistan at the Blacktown Olympic Park Oval in Sydney on Monday. Rubel Hossain was the only Bangladeshi batsman not to be dismissed, not facing a single delivery during his stay at the crease as Arafat Sunny was the last batsman dismissed, while Mohammad Irfan was the pick among the Pakistan bowlers with figures of five for 75 in 13.5 overs. Mahmudullah and Tamim Iqbal had earlier top-scored for Bangladesh, scoring 83 and 81 respectively.  LIVE BLOG: Bangladesh vs Pakistan ICC Cricket World Cup 2015 warm-up match

Bangladesh had earlier won the toss and elected to bat. They were off to a shaky start when they lost their first wicket with just one run on board as Anamul Haque departed on a seven-ball duck, getting caught by Sohaib Maqsood off a Sohail Khan delivery. Sixteen runs were added to the Bangladesh total before Mominul Haque joined Anamul back in the pavilion on a score of seven from 13 balls, getting dismissed by Irfan. The Bangladeshis were looking vulnerable at a score of 16 for two, and Pakistan seemed to go for the kill. ICC Cricket World Cup 2015: POINTS TABLE

It was then that Iqbal and Mahmudullah joined hands to rescue their side from a certain collapse. The two began on a slow note, not scoring a boundary for the first ten overs as Pakistan decided to employ a spin-heavy bowling attack that included Sohail aside from Yasir Shah and Shahid Afridi. The two went on to score their respective half-centuries as the partnership crossed the 100-run mark in the middle-stages of the innings.

At 184 for two, things seemed to be going perfectly for the Bangladeshis as they looked to finish on a major total. It was then that Ahmed Shehzad managed to get the much-needed breakthrough along Pakistan’s way, running Mahmudullah out on a score of 83 from 109 deliveries, heading back to the pavilion after scoring five boundaries. Yasir Shah then showed once again why he is one of the most lethal bowlers in the Pakistan attack, removing Iqbal and Mushfiqur Rahim off successive deliveries to bring the tilt of the game back to Pakistan’s favour. ICC Cricket World Cup 2015: SCHEDULE & MATCH DETAILS

Bangladesh have depended on star all-rounder Shakib Al Hasan to get some quick runs along their way in the past, and would have expected him to do the same in the current match. Shakib hit three boundaries and raced to 31 runs off 30 balls, sharing a 41-run stand for the sixth wicket with Soumya Sarkar (15 off 17 balls). The two departed within a space of a few deliveries, leading to a lower-order collapse for the Bangladeshis as they lost their last five wickets for a meagre 15 runs.

While a 247-run target may not look very intimidating for Pakistan, they will not downplay the Bangladeshi attack easily, given how dangerous Shakib can be with the ball. Skipper Mashrafe Mortaza and Rubel Hossain will be expected to open the bowling attack for Bangladesh and will be crucial in their defence of the target. 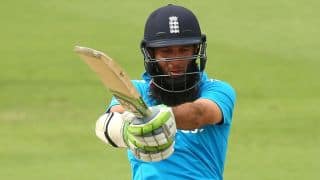