Mahmudullah was run-out as Bangladesh lost their third wicket with 184 runs on board.

Bangladesh lost their third wicket with 184 runs on the scorevoard when Mahmudullah was run-out on a score of 83 from 109 balls in the first delivery of the 40th over during their warm-up encounter against Pakistan at the Blacktown Olympic Park Oval in Sydney on Monday. Pakistan got the much-needed breakthrough with Ahmed Shehzad effecting the run-out, bringing an end to the 168-run stand between Mahmudullah and Tamim Iqbal, who is batting on a score of 73.  LIVE BLOG: Bangladesh vs Pakistan ICC Cricket World Cup 2015 warm-up match

Among the Pakistan bowlers, Sohail Khan was the most consistent as he conceded a mere 18 runs from the six overs that he bowled, taking the wicket of opener Anamul Haque in the process. Mohammad Irfan was the other wicket-taking bowler for Pakistan.

The day started with Bangladesh winning the toss and electing to bat. Anamul Haque was the first batsman to depart, getting caught by Sohaib Maqsood off the bowling of rookie pacer Sohail Khan for a seven-ball duck. Bangladesh had added 16 runs to their tally when Pakistan decided to introduce spin early into their attack, resulting in the departure of Mominul Haque departed on a score of seven, getting dismissed off the bowling of Mohammad Irfan. ICC Cricket World Cup 2015: POINTS TABLE 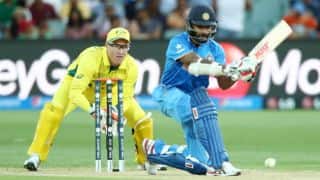