Pakistan need another 48 runs from 46 balls as Misbah was bowler on 10.

Pakistan lost their sixth with with 199 runs on board as skipper Misbah-ul-Haq was dismissed on a score of 10 from 19 balls during the 43rd over of the innings, getting his stumps rattled off the bowling of Taskin Ahmed to give the spinner his second wicket of the match during their ICC Cricket World Cup 2015 warm-up match against Bangladesh at the Blacktown Olympic Park Oval in Sydney on Monday. Pakistan needed another 48 runs to win from 46 balls.  LIVE BLOG: Bangladesh vs Pakistan ICC Cricket World Cup 2015 warm-up match 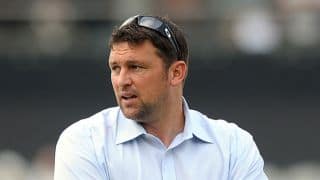