Pakistan reached a score of 133 for the loss of four wickets after 30 overs, needing another 114 runs to win from 120 balls with Sohaib Maqsood and Umar Akmal batting on scores of 39 and 17 off 48 and 16 deliveries respectively during their ICC World Cup 2015 warm-up game against Bangladesh at the Blacktown Olympic Park Oval in Sydney on Monday. Mahmudullah was the pick among the Bangladesh bowlers, conceding 17 runs from four over while taking the wicket of Haris Sohail. LIVE BLOG: Bangladesh vs Pakistan ICC Cricket World Cup 2015 warm-up match 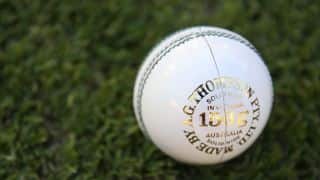