Sohaib Maqsood was unbeaten on 93 off 90 balls as Pakistan won with 11 balls to spare.

Pakistan won their ICC Cricket World Cup 2015 warm-up match against Bangladesh by three wickets at the Blacktown Olympic Park Oval in Sydney on Monday, having chased the 247-run target with 11 balls to spare. Sohaib Maqsood was instrumental in guiding his side to the victory with a knock of 93 off 90 deliveries, while Wahab Riaz was unbeaten on the other end on a score of two off three deliveries. LIVE BLOG: Bangladesh vs Pakistan ICC Cricket World Cup 2015 warm-up match

Pakistan began the chase on a disastrous note when they lost openers Sarfraz Ahmed (one) and Ahmed Shehzad (five), with Pakistan reeling at a score of eight for two during the fifth over of the match. Skipper Mashrafe Mortaza and Rubel Hossain caused the early damage for the Pakistanis. Younis Khan and Haris Sohail managed to avoid an early collapse for Pakistan as they added 44 runs for the third wicket, before Younis was dismissed on 25 off 41 deliveries, leaving Pakistan at 52 for three. ICC Cricket World Cup 2015: POINTS TABLE

Haris and Sohaib Maqsood added 51 runs for the fourth wicket, with Sohail adding 39 runs off 55 deliveries as the pressure slowly began to ease off the Pakistani camps. Haris, who is proving himself to be a valuable all-rounder in the Pakistan side, was eventually caught by Soumya Sarkar off the bowling of Mahmudullah as Pakistan lost their fourth wicket with 103 on board. ICC Cricket World Cup 2015: SCHEDULE & MATCH DETAILS

Maqsood and Umar Akmal began to add some spice to the game with a few big hits coming their way. Maqsood brought up his half-century during the fifth-wicket stand with Akmal in 64 deliveries. Pakistan wicket-keeper Akmal struck three boundaries as well as a six during his innings, as the target began to appear within sight during the partnership. Akmal was eventually dismissed on 39 off 41 deliveries when he was caught by his Bangladesh counterpart Mushfiqur Rahim off the bowling of Mortaza. Pakistan skipper Misbah-ul-Haq came to the crease, and added 10 runs off 19 balls, before getting bowled by Taskin Ahmed. ICC Cricket World Cup 2015: Complete Coverage

Maqsood and hard-hitting all-rounder Shahid Afridi added a quickfire 41 runs for the seventh wicket off 29 deliveries, with Afridi scoring 24 runs off 20 deliveries with the help of three sixes to bring Pakistan to the brink of a win. Even though he was dismissed when he was caught by Arafat Sunny off the bowling of Shakib Al Hasan, the match was pretty much sealed in Pakistan’s favour. Maqsood completed the formalities at the start of the penultimate over, though he missed out on a well-deserved century by seven runs.

Bangladesh had earlier won the toss and elected to bat. Like Pakistan, they too got off to a shaky start. They were reeling at a score of 16 for the loss of two wickets, with Anamul Haque departing on a seven-ball duck. Tamim Iqbal and Mahmudullah decided to swing things around by adding 168 runs for the third wicket, with both facing 109 deliveries to score 81 and 83 respectively.

Bangladesh were cruising at a score of 184 for two, Pakistan took three quick wickets to swing things back to their favour. While Ahmed Shehzad effected the run-out of Mahmudullah, spinner Yasir Shah castled both Iqbal and Mushfiqar Rahim, with the latter departing on a golden duck. Bangladesh all-rounder Shakib Al Hasan added 31 runs off 30 deliveries to provide a late boost to the Bangladesh innings, though they lost their last five wickets for a meagre 15 runs as Pakistan were bundled out for a 246-run total, failing to play 50 overs. Mohammad Irfan was the pick among the Pakistan bowlers, recording figures of five for 52 from 9.5 overs. 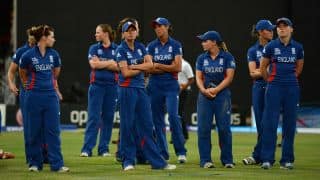