Maqsood has added 64 runs for the fifth wicket with Umar Akmal.

Sohaib Maqsood brought up his half-century as he added 64 runs for the fifth wicket with Umar Akmal, who was batting on a score of 39 off 41 deliveries as Pakistan reached a score of 167 for four in the 37th over during their ICC World Cup 2015 warm-up game against Bangladesh at the Blacktown Olympic Park Oval in Sydney on Monday. Pakistan needed another 80 runs with a little over 13 overs left, with a plenty of batting in store for the Pakistanis. LIVE BLOG: Bangladesh vs Pakistan ICC Cricket World Cup 2015 warm-up match 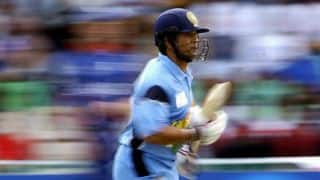