Bangladesh were 68 for two at the end of 21 overs, with Tamim and Mahmudullah batting on

Tamim Iqbal and Mahmudullah completed the 50-run stand for the third wicket to guide Bangladesh to a score of 68 for two at the end of 21 overs during their warm-up match against Pakistan at the Blacktown Olympic Park Oval in Sydney on Monday. Bangladesh had lost their second wicket with a mere 16 runs on the board. Iqbal and Mahmudullah were batting on scores of 29 and 28 respectively, as the pair looked to see the innings through and guide their side to a challenging total.  LIVE BLOG: Bangladesh vs Pakistan ICC Cricket World Cup 2015 warm-up match

The two were taking their time in getting the runs along their way though, as only two boundaries have been scored in the innings so far, with the run-rate going at a little over three per over. As many as five bowlers have been used by Pakistan so far, including spinners Shahid Afridi, Yasir Shah and Haris Sohail. 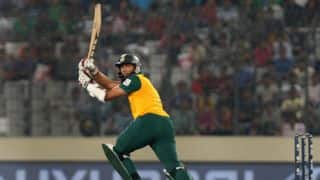 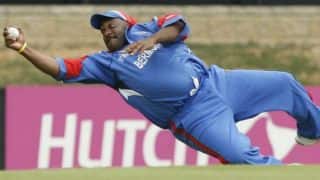