Younis was caught by Shakib Al Hasan off the bowling of Taskin Ahmed as PAK were 52/3 after 15.3 overs.

Pakistan lost their third wicket with 52 runs on the board when Younis Khan was caught by Shakib Al Hasan off the bowling of Taskin Ahmed after 15.3 overs during their warm-up match against Bangladesh at the Blacktown Olympic Park Oval in Sydney on Monday. Younis hit a couple of boundaries while at the crease, and added 44 runs with Haris Sohail (17 not out) for the third wicket to save Pakistan from an early collapse, though they are yet to come out of danger as they need another 195 runs with seven wickets in hand. LIVE BLOG: Bangladesh vs Pakistan ICC Cricket World Cup 2015 warm-up match 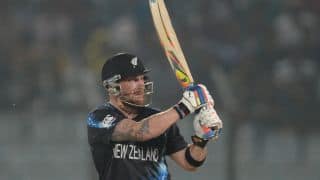