Both the teams have an illustrious rivalry, which should witness another nail-biting encounter.

(Bangladesh take on Pakistan in the eighth match of the Asia Cup 2014 at Mirpur. Bangladesh have not won a match so far. Pakistan, on the other hand, are on the verge of entering their second Asia Cup final in a row. Catch live cricket scores of the match in our live blog below.)

Fantastic performance from both the sides and they completely deserve richest of the applause. Pakistan held their nerves towards the end to register a historic win, where as thousands in Bangladesh would be heartbroken with yet another close loss. It took one man to change the game completely, take a bow, Shahid Afridi the Man of the Match.

Pakistan now take on the high-flying Sri Lanka in the final of the tournament on Saturday. For the Indian fans, the tournament is over but they can still catch their favourite stars in action on Wednesday when India take on Afghanistan.

What a performance by Bangladesh! They produced an inspired batting show to put up a huge 326/3 in their 50 overs, with Anamul Haque scoring his second century of the career. Pakistan HAVE NOT successfully chased anything above 250 in the last couple of months, and it will be interesting to see how things pan out later today. Meanwhile, read our innings report here

Toss: Bangladesh have won the toss, and have elected to bat first.

Bangladesh have made five changes to their team. Looks like, the loss to Afghanistan has forced some tough decisions. On expected lines, Shakib Al Hasan has been included in the playing XI. Pakistan have given rest to Sharjeel Khan, who had some hamstring issue in the match against India.

Meanwhile, Misbah wants to ensure there’s no run-outs this time, says jokingly, “I have asked them not to run until the ball reaches boundary.”

Hello and welcome to the live updates of the eighth match of the Asia Cup 2014 between Bangladesh and Pakistan at Mirpur. This is Devarchit Varma and I will be bringing you the updates of this match. Bangladesh, having lost the first two matches are out of tournament and will play for pride against arch-rivals, Pakistan. But Pakistan will aim to win this match and book the remaining final berth. 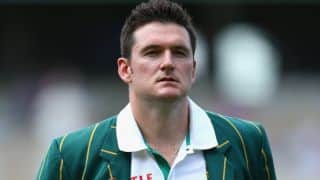