Bangladesh will have to go through yet another match as South Africa will be aiming to end the series with their unbeaten tag, winning the second T20I.

After dominating Bangladesh in Tests and ODIs, South Africa carried their form into shortest format as well. They won the series opener by 20 runs, and are on course for another whitewash across formats. The series came as Bangladesh s chance to prove themselves but they failed to capitalise on crucial moment in the previous game. The hosts are brimming with confidence as Bangladesh again have proven to be bully of pace. They have a task in hand with South Africa aiming to end the whole tour maintaining an unbeaten tag.

South Africa have picked a second-string side. While some were forced changes, selectors made few others to form a stronger bench. For instance, Robbie Frylinck made his international debut at 33. They have rested two key players in Kagiso Rabada and Imran Tahir. The decision show the amount of confidence, and have been backed by good performance in the first match. While Bangladesh could have cashed in on the absence of Faf du Plessis, Rabada and Tahir, they went on to give away too many runs. The top order collapsed in pursuit of 196, adding to their woes.

Bangladesh, though are playing without Mustafizur Rahman, have an experienced side. Shakib Al Hasan, Mushfiqur Rahim and Mahmudullah the three pillars of Bangladesh s batting line-up, failed. Though the likes of Soumya Sarkar and Mohammad Saifuddin put in their 100 per cent, they could not save the sinking ship.

Lack of quality fielding added to Bangladesh s miseries. Gifting runs to the opponent who are already scoring in bulk just widened their path. Visitors would surely want to improve on this aspect and end the tour on a high.

Bowling, needless to say, lacks accuracy. South Africa are used to facing a quality pace attack in the nets itself and Shakib will have to rotate his pacers wisely. Mehedi Hasan Miraz continued to impress and remains his side’s key spinner. For batting, Bangladesh need to believe in their experience and abilities.

As for South Africa, this match will be yet another chance for David Miller and Farhaan Behardien to prove themselves worthy of getting a spot on regular basis. 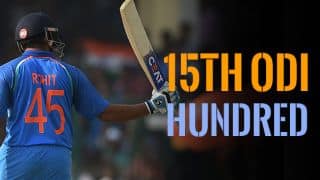