Dean Elgar grabbed headlines with his hundred, propelled South Africa to 298 for 1 on Day 1 of the first Test. Elgar remained unbeaten on 128 and in the process became the leading run-scorer in Tests in 2017. Elgar has now scored 890 runs in 2017 at an average of 52, including four centuries. He received support from partner Hashim Amla who remained unbeaten on 68. However, debutant Aiden Markram also played his part with an aggressive knock of 97.

On conditions favouring the batsmen, Mushfiqur Rahim put South Africa to bat. Elgar and Markram had already grabbed the headlines for their 184-stand in the domestic match last week. This time too they were unstoppable. Elgar and Markram thrived adding 196 runs on board.

Markram almost cemented his place permanently in the side as he scored fifty on his debut, becoming the ninth South African batsmen to do so. It was before tea when Sabbir Rahman s accurate throw denied Markram his century on debut.

Two deliveries later, Elgar acknowledged his century celebration but regretted the mix-up with his new opening partner. Thereafter, it was Amla and Elgar who steadied the ship with yet another century-stand.

Bangladesh might have roared in their backyard against Australia, their bowlers struggled to find the right line and length. They had nothing to cheer about apart from the run-out. The discipline with the ball was missing for the visitors. 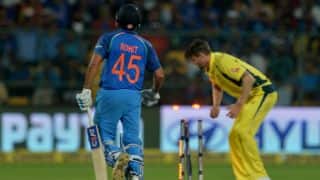